We are given a binary file, and a short challenge description, you can download the file here 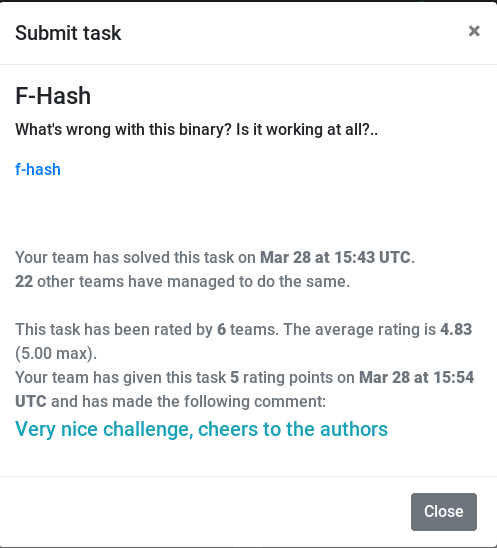 The given file is a 64bit ELF executable.

as the challenge description states that the binary is not working, we expect it to have corrupt headers, or to segfault because of a programming error.

We run it, and nothing happends, it just keeps running 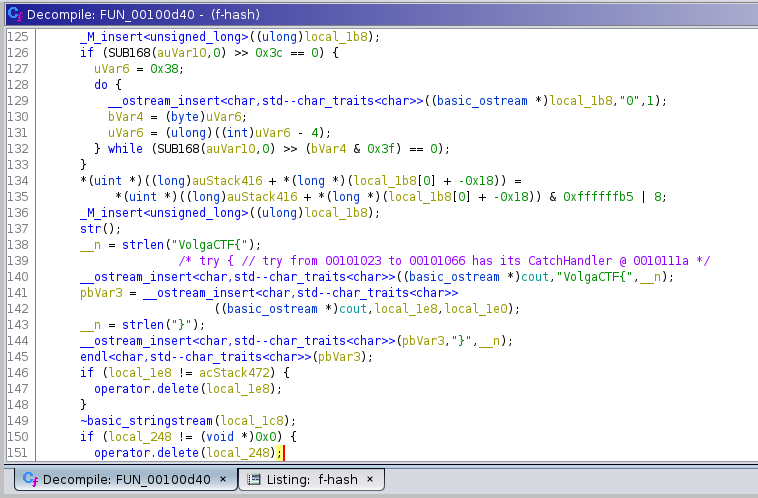 Just by looking at the pseudocode of the main function, generated by Ghidra, we can tell that this was probably written in C++, and that it should print VolgaCTF{...} (you can see how line 140 looks like std::cout, and should print to stdout).

The program is probably stuck before reaching this point, in order to find out, we will run it with a debugger, interrupt its execution (hitting CTRL+C), get which part of the code it’s executing, and try to find out why it’s stuck. 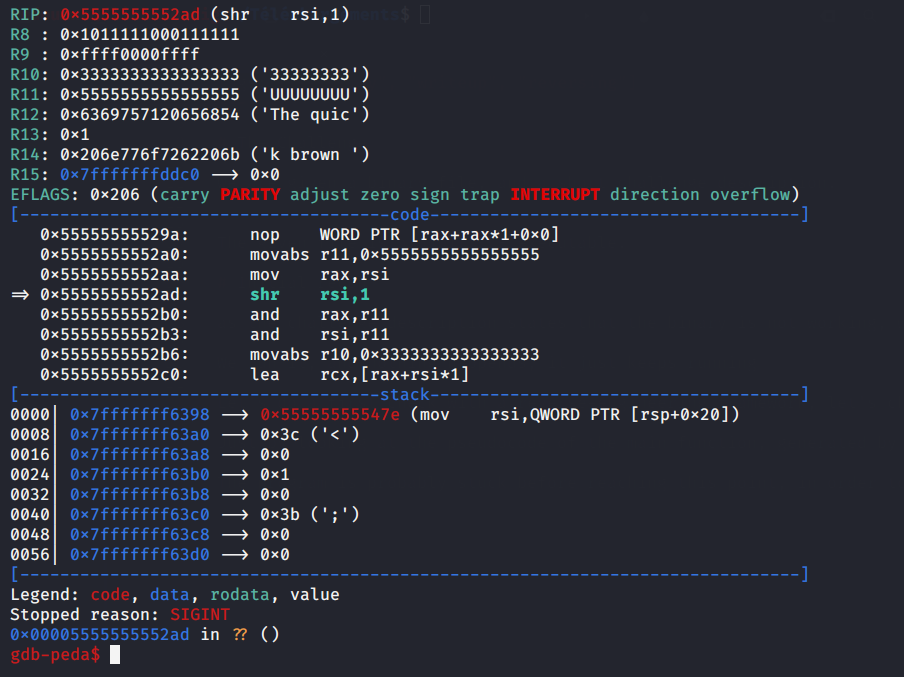 Since the program is compiled with PiE enabled (ie: it’s position-independent), we must substract the address from where the binary is loaded in memory (found in /proc/<pid>/maps, or viewable via the vmmap peda command), to get the offset to one address inside the region of code where the program is stuck, we find the offset 0x12ad. 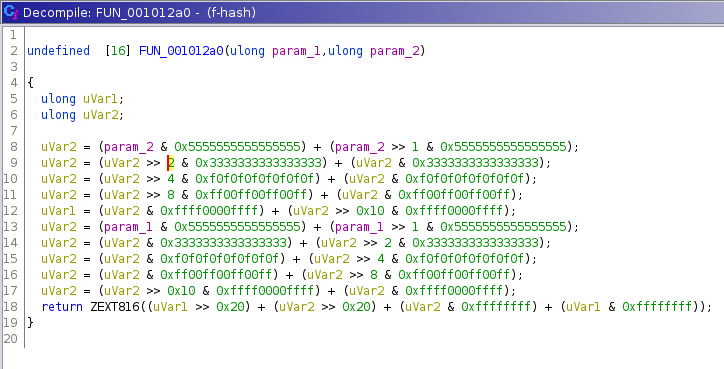 Nothing that could loop forever here, it looks like a cryptographic function, we will name it PRF_1 (for Pseudo Random Function), let’s find XREFS to this function (where it is called from).

It’s called in 3 places, from the same function, let’s check that function. 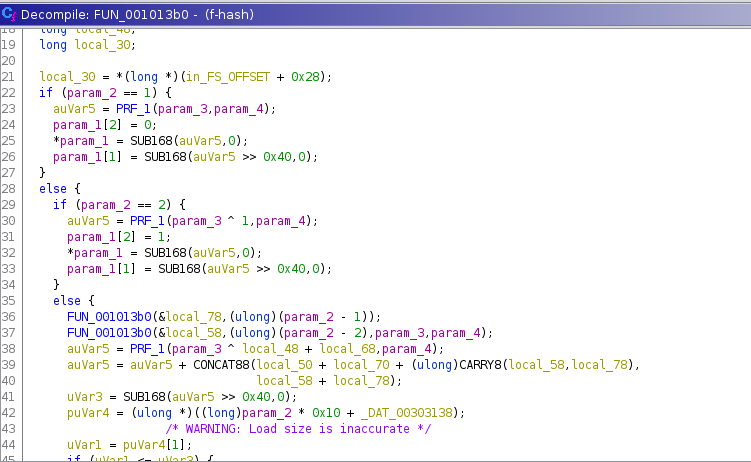 Let’s call FUN_001013b0 recursive_fun, and find out where it’s called from (using XREFS)

Ignore the first two calls, they are the recursive ones, it’s only called from FUN_001014e0.

(note: the base address of the binary should change randomly on each run (because of PiE), but gdb disables randomization by default, disable-randomization is ON) 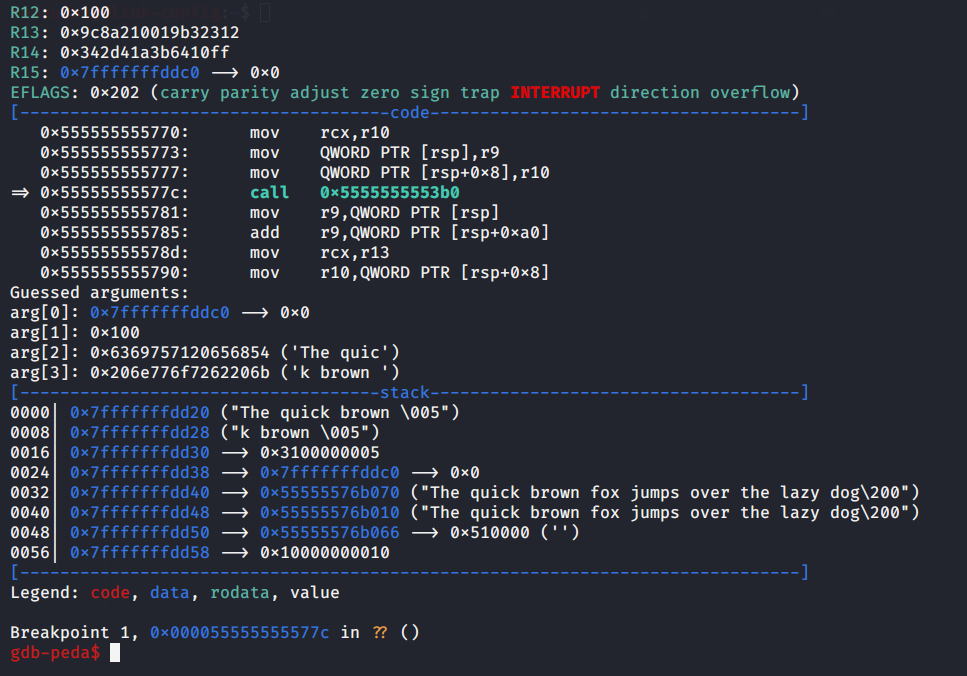 The breakpoint is hit, and we see the arguments passed to the function:

When we enter nexti to step over the call, the program doesn’t respond, this means, this function is probably where it’s stuck.

This gives a high-level view of the function, not all of this pseudocode is accurate through, but we can already see that the function behaves like this (in pseudocode):

The missing code reads data from a global array, and does some computations based on what the call to PRF_1, the global array data, and what the recursive calls returned.

The question is : how can we compute recursive_fun efficiently?

We see that in recursive calls, only the value of i changes, the function looks like a (complicated) variant of the fibonacci function, we have a recurrent relation of the form:

for fixed x,y values, some constants const_A, const_B, and a function f that can be computed in polynomial time.

The inefficience of this implementation stems from the fact that the function has overlapping subproblems, and the recursive implementation wastes time recomputing them again and again, consider for example, a call to recursive_fun with i=6

at the end, computing values of recursive_fun becomes as trivial as reading from the array.

It’s efficient because the solution of each subproblem is computed once, and stored, subsequent calls will read it from the array (and thus preventing the creation of a larger call tree).

The solution most people will think of, is to reimplement the function using one of the techniques above, in a separate program, and get what it should return, at first, that’s what I was doing, but then, I got a better idea (and more guaranteed to work without hard-to-debug problems), what if I added memoization code to the already-compiled function? it’s just code added at the beginning (to check if it was already computed), and at the end (to cache the result).

The advantages of doing this is:

Allocating memory for our memoization code, and for our results array

We will do everything inside a gdb debugging session, as it disables randomization, and supports scripting.

First, we allocate 1024 bytes for our memoization code, we make the allocation at a fixed address (0x10000), and with executable protections (as it’s for our injected code).

for the results array, since recursive_fun returns three unsigned long longs, each element of it will contain 4 fields : the first three are as returned by recursive_fun, the fourth one, when 1 marks the element as existent, when 0 marks it as free. That is 32 bytes for each entry of it, we will allocate it with:

(0x101 elements, so that $results[0x100] is bound, and is what the function computes). Since we need two codecaves: one for the memoization code running at the beginning of the function, and one at the end, we will set:

In order to insert code at a certain line in the function, we will:

We will number each shellcode, as well as the address where it will be written.

Since our $cave1 is at 0x10000, we will patch the beginning of recursive_fun:

this takes 7 bytes, and overwrites the instructions

So we need to run them at the end of our code at $cave1 (if we are returning to execute the function, otherwise, if the result is cached, we can return straight away from the function).

First shellcode: checking if the result is already computed at the beginning of the function

So, if the result is already computed, it will not even execute the code inside recursive_fun.

Second shellcode: cache results at the end of the function

The problem we find when trying to do it in assembly is that we don’t find a way to access i at the end of the function, remember, it was a function argument, passed in the rsi register, and copied into rbx, but both had their values changed inside the function (and maybe recursive calls), so, how do we get it?

We can’t make the shellcode in $cave1 store it in a register, otherwise, recursive calls would change it, it needs to be stored in the storage of the function executing (one if its local variables for example), but one that is never changed.

For this, I got a pretty clever idea, as the index needs to be saved in the stackframe of the function (as one if its local variables that is never changed inside the function for example), so that recursive calls don’t change it, and I noticed the function is protected with a stack canary, why not save the index instead of the canary? :p

The stack smashing protector (also called stack canary) is a random value that is saved on the stack at the beginning of the function, and checked for changes when the function is about to return, to detect buffer overflows, we are pretty sure that no code will change it after it’s set. 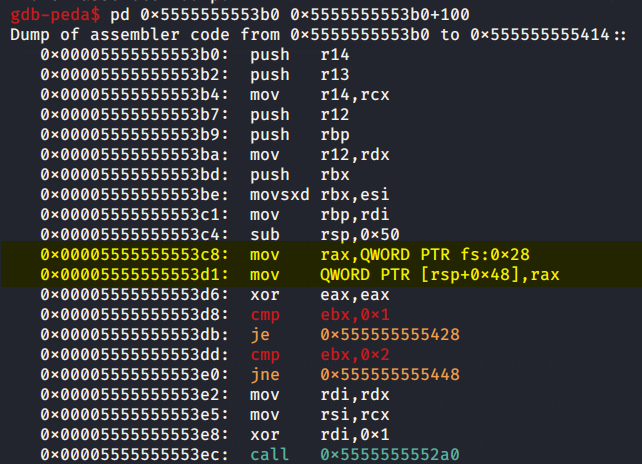 at that instruction to make it store i instead.

The end of the function (where it returns) looks like this: it checks if the canary has changed, if yes, probably calls __stack_chk_fail or abort, otherwise, cleans the stack and returns. 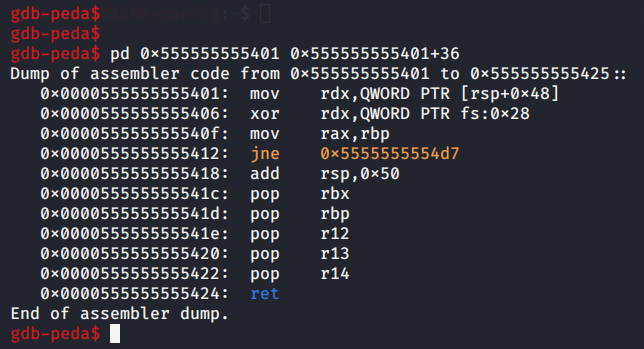 after the first instruction, i will be in rdx, So, for our shellcode, we will use rdx as an index.

Note: I added the code at the end of the function in $cave2, in order to return directly from there to the caller of recursive_fun.

Finally, the jmp to $cave2 should be done right after the stack canary is read (at the end of the function, to cache the result, rbp = buf in this case).

0x10200 is the address of $cave2, I added 2 nop instructions to keep my patch to the size of an instruction, but since I am not returning from $cave2, that’s optional.

How to assemble shellcodes

Other things to keep in mind

It turns out that recursive_fun is called multiple times from the same address with different x and y values, and i = 0x100, it’s necessary to clear the results array between two successive calls, otherwise, it will be using previously cached values that are wrong. We will clear it with

I’ve numbered each shellcode, as well as the address where it should be (see on the top). The patch command writes the results of assembing the shellcodes (returned by nasm, which is used by rasm2), into the target addresses. 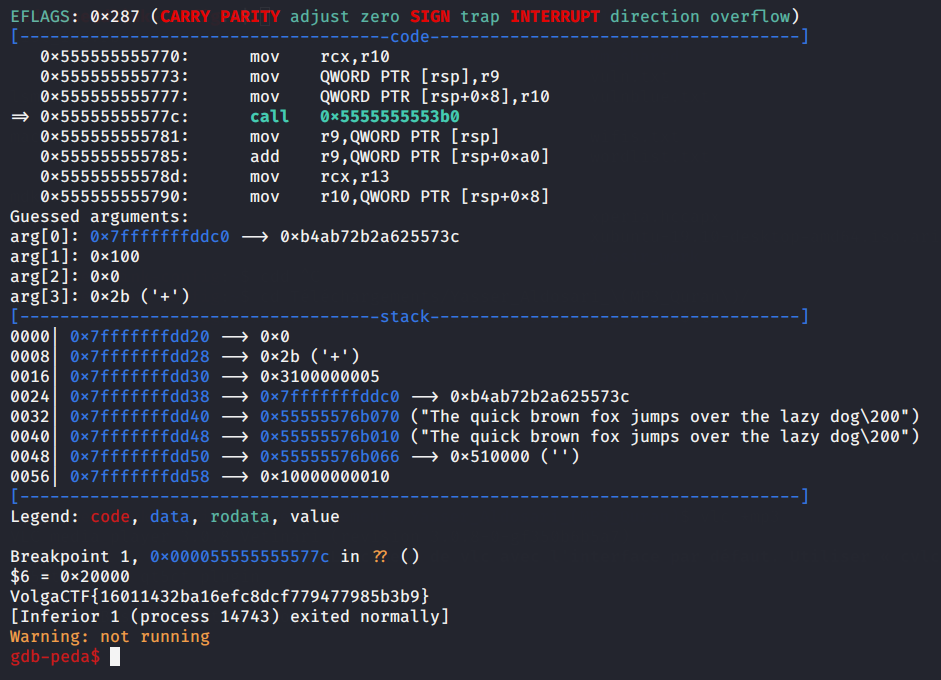