When exploit mitigations are disabled on modern systems

While experimenting with the Windows exploit mitigation policies, I noticed that MinGW-GCC does not enable most of the modern protections by default.
This post is more like a writeup, demonstrating an exploit that can be adapted to work on other vulnerable programs compiled with the same compiler, also, it does not require knowledge of the version of the Windows DLLs in use, or the virtual addresses where they are loaded.
Tested on Windows 10 Professional, version 1803
gcc version 8.3.0 (Rev2, Built by MSYS2 project), latest at the time I am writing this.

The compiled executable can be found here.

There is a clear vulnerability in the line scanf("%s", &name);, because scanf doesn’t know the size of the name buffer, it can read more than 60 character, thus overflowing the stack.
This program, albeit vulnerable, shouldn’t be exploitable on modern systems, a lot of effort has been put to mitigate memory corruption vulnerabilities, but surprisingly, it is!

Analysis of the executable

First, let’s check the exploit mitigations enabled on the executable by running Process Explorer (from sysinternals). 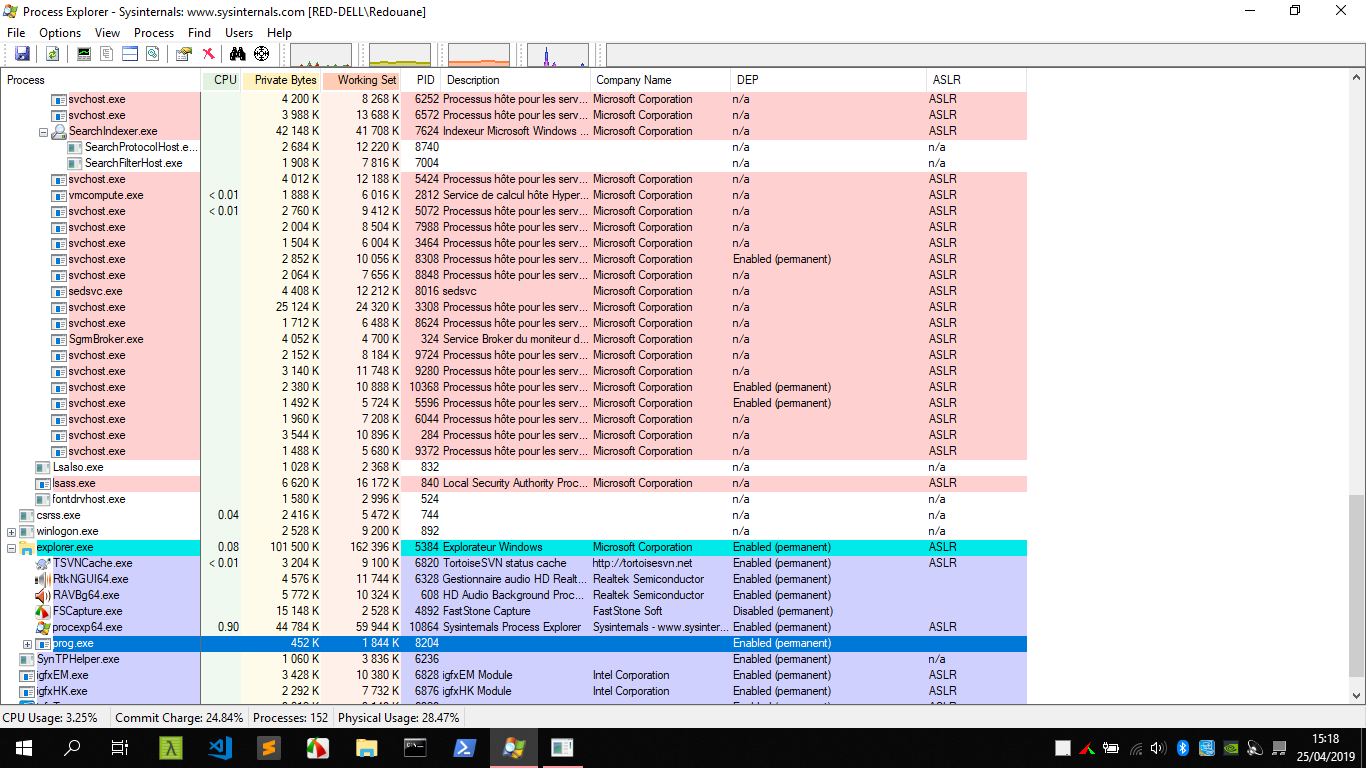 Surprisingly, we notice that ASLR is not enabled, and it’s the case for many other programs, this is already a big issue, this means that the imagebase of the main module (prog.exe) is fixed (and can be found in the headers).
DEP is enabled.

By having a look at the import table, we also notice that the compiler has added imports we didn’t reference from our code, one particularly interesting import is VirtualProtect, which is similar to the mprotect syscall on Linux (it changes the protections of pages of memory). 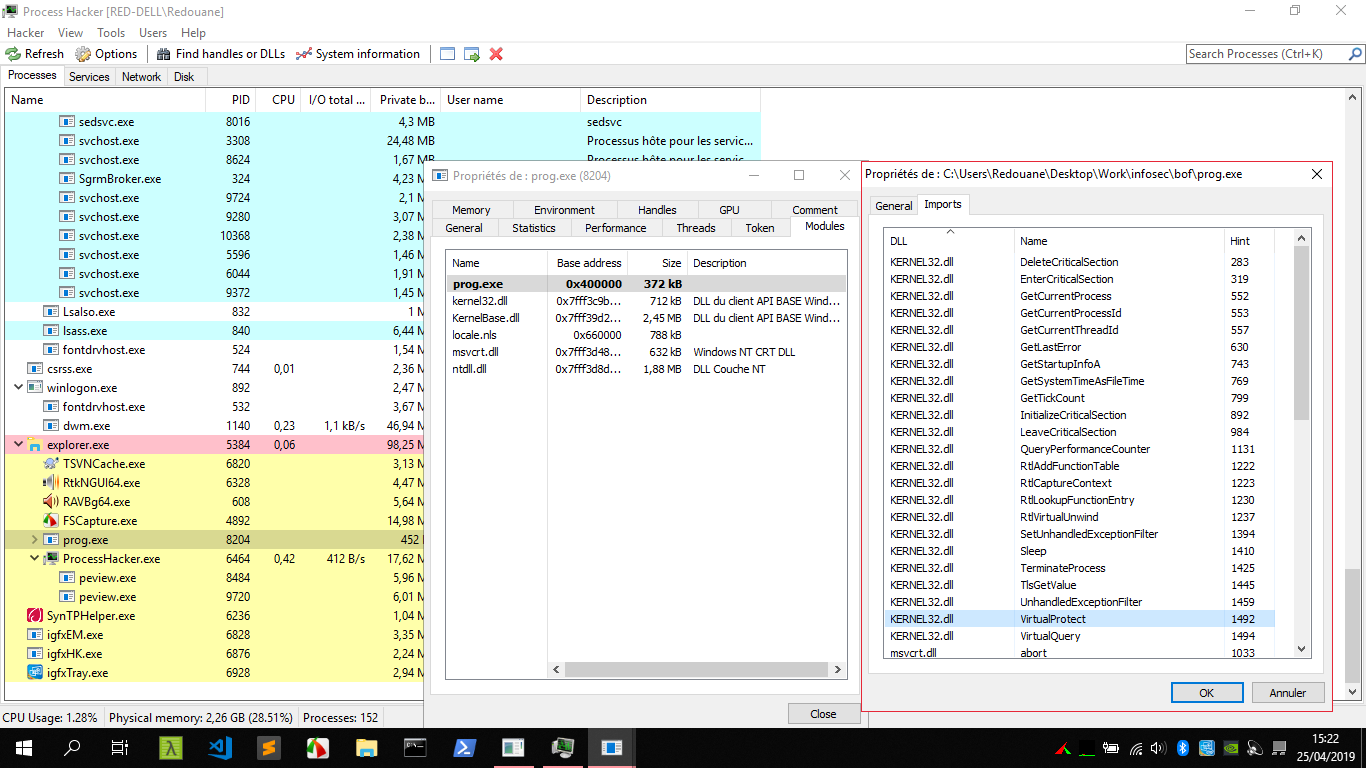 ASLR stands for Address Space Layout Randomization, on Windows, it ensures that the module will be loaded at a dynamic virtual address that will change on each reboot.
DEP stands for Data Execution Protection, it’s a protection that ensures that the data sections (like the stack) are not executable, it prevents the classical buffer overflow attacks that overwrite the return address with the address of the user-controlled data, and execute shellcode directly.
SSP (for Stack Smashing Protector) is a protection that aims to detect buffer overflows, each function starts by saving a random value (a cookie) on the stack right next to its saved base pointer, and when it’s about to return, it checks if that value has changed, when a buffer overflow occurs, if the attacker doesn’t know that random value, any stack overflow will be detected.

Let’s start by causing a crash, and finding the offset to the return address. 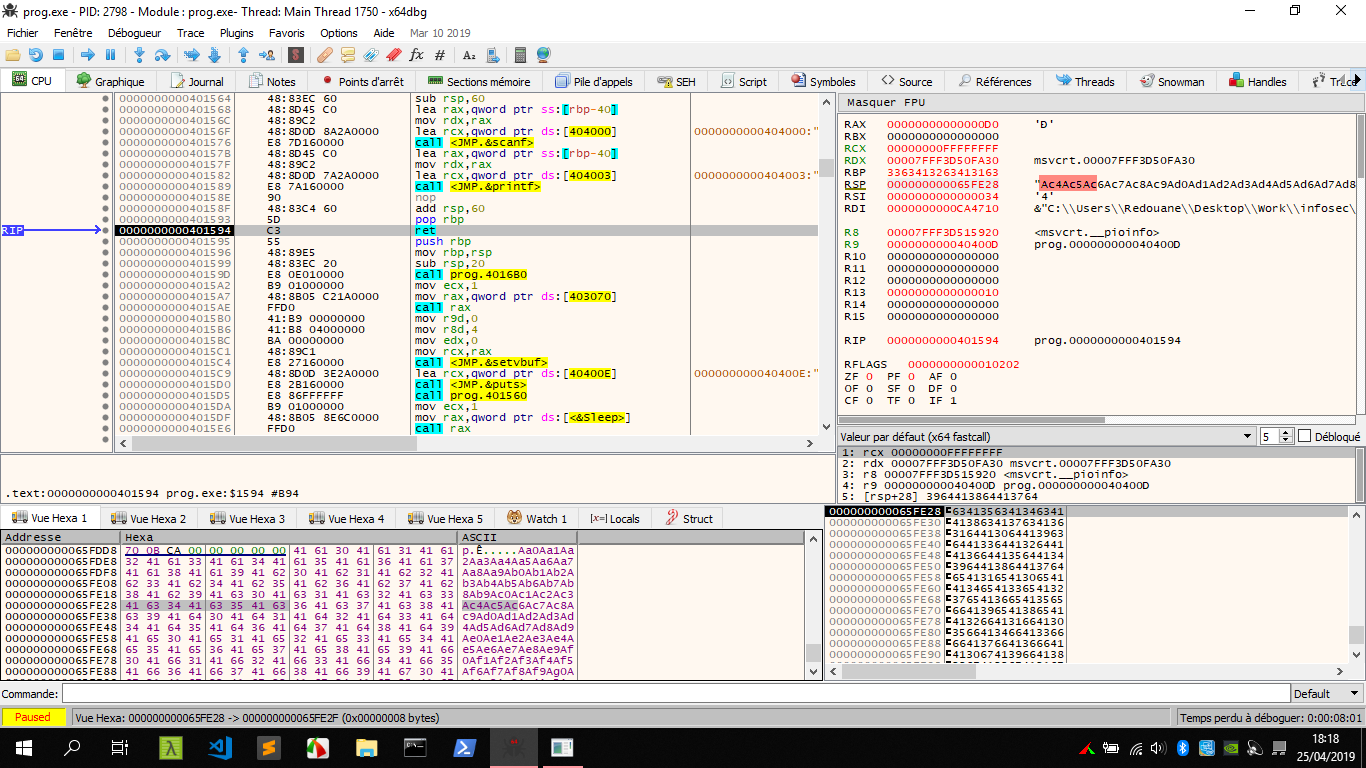 First, we don’t know how much memory we have on the stack to read our payload (rsp might leave the stack region while reading our payload), in order to make our exploit more reliable, we will scanf on a region that is -RW (.bss section for example), and then we will pivot the stack (make rsp point to that region instead).

Then, we will return to VirtualProtect to make sections on the main module ERW.

Finally, we will read our shellcode to the ERW memory, and we will jump to it.

Doing this is not straightforward, as DEP is enabled, we cannot execute our own code, we are obliged to reuse the existing code in the application, this is where ROP comes into play.

Searching for ROP gadgets in the application

We will use rp++ to search for ROP gadgets in the .text section of the main module. 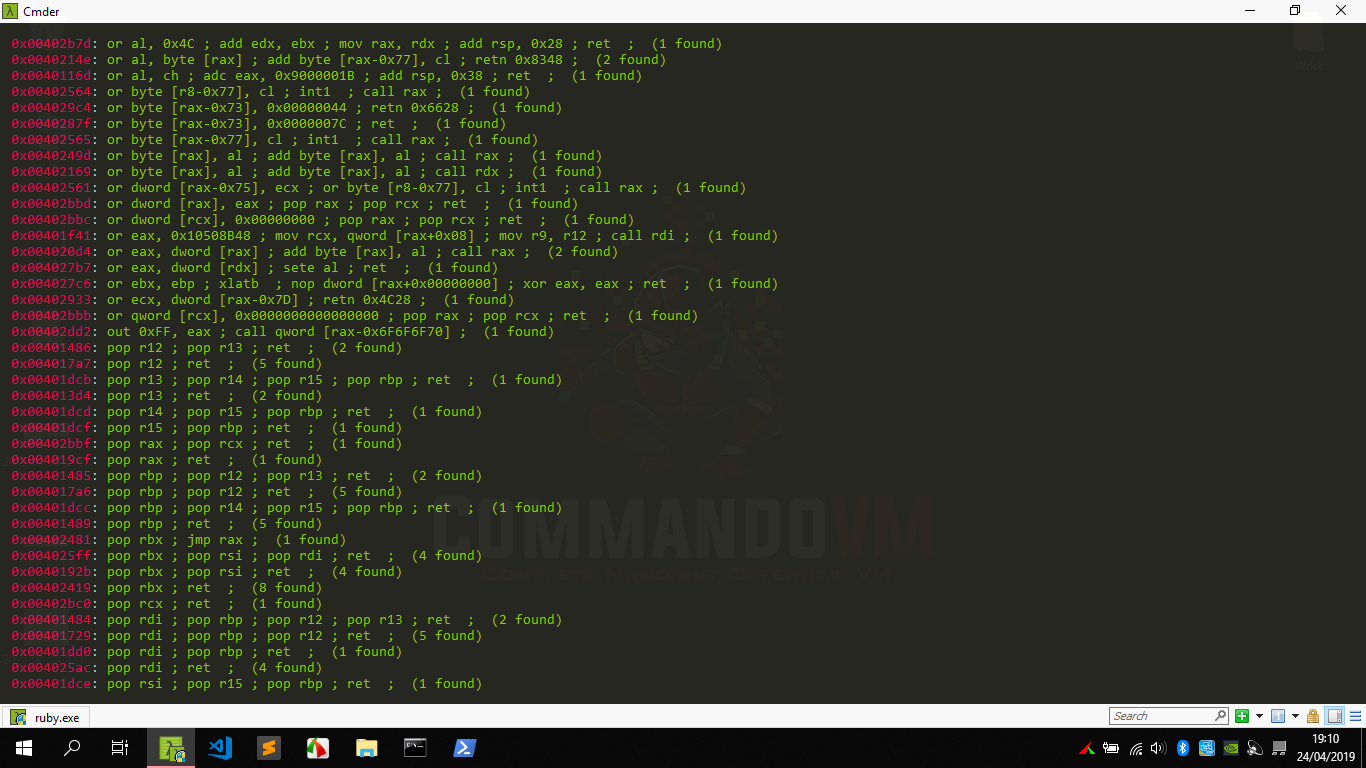 The gadgets we find particularly interesting are the following:

ROP (Return Oriented Programming), is an exploitation technique commonly used to bypass DEP, since you can’t execute shellcode directly, you carefully choose some instruction sequences that generally finish with ret or jmp from the .text section such that when you execute them sequentially, you get the effect you want, these sequences are called gadgets.
The calling convention in use is __fastcall, first four arguments are passed in rcx,rdx,r8,r9, four qwords of shadowspace must also be allocated on the stack prior to the call (we will be using the gadget at 0x004010a7 to deallocate the shadowspace, because the function will not clean the stack for us).

I split the exploit in multiple parts, to make it easier to follow.

Let’s set some variables that will act as parameters in our payload.

I am representing the payload as an array of qwords, converting the array to a payload string is simple (refer to the whole exploit code for more informations).

Part2 - VirtualProtect the main module to ERW, scanf on ERW memory, and jump to it:

One challenge we face here is that we have no gadget to control the r9 register, and we need it because VirtualProtect takes 4 arguments (fourth argument is just a pointer that retrieves the old protections). Using objdump, and looking for instructions containing r9, we find this sequence:

Great! now, we can run any shellcode we want, the only constraint is that it must not contain whitespace characters (because scanf will stop reading input if it encounters such characters).

Let’s just generate a shellcode that pops the Windows calculator with msfvenom (part of Metasploit Framework), -b stands for bad chars, an encoder will be used to avoid these whitespace characters.

Putting it all together

In the exploit, we have mostly used gadgets that should be present in every executable compiled with mingw-gcc, the only gadgets specific to this executable are the ones reading input (using scanf function), while programs differ in the way they read input, almost any stack buffer overflow can be turned into arbitary code execution using an approach similar to the one explained in this article.

Read other posts
← GSoC 2020 - Enhancing metasploit support for 'the Hack That Will Never Go Away' NFSMW2012 : making opponents fly →
comments powered by Disqus