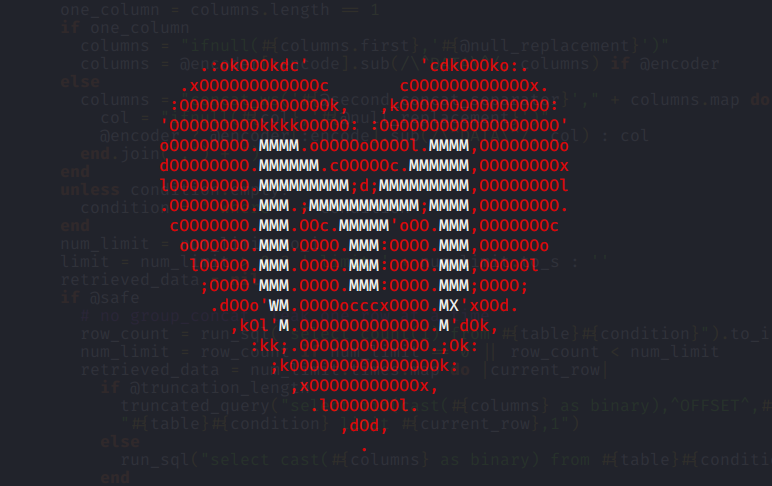 Being interested in computer security, and being an opensource lover, I wanted to participate in Google Summer of Code this year, after checking out the list of organizations, I applied for Metasploit, because Ruby is my main programming language, and because I was very interested in contributing to a framework of this popularity.

You can find my proposal here.

The aim of my project was to add a library that takes care of all these issues, making module writing easier in the case of SQL injections, I wanted the library to:

On May 4th, I got the announcement of being accepted to take part on the program, during the month of May, I did my best to get familiar with the codebase, I tried fixing issues, understanding the structure of the libraries that had a similar usage to what I was willing to develop.

Some issues I fixed in the Community-Bonding period:

a module I also contributed during that period:

Thanks to h00die for helping out on this module.

Results of my contribution

After working three months on implementing the project on my proposal, here are the Pull-Requests I sent during the GSoC period:

Summary of the work done:

My Google Summer of Code journey

During the first month of the program, I started working on support for MySQL/MariaDB, the design of the library is really something I am proud of, from the beginning, I decided to let users provide a block that would query the server (so that the library does not have to handle networking stuff), and to make use of inheritance, so that SQL Injection objects behave the same, even if technically, their exploitation is done differently, take for example regular SQL injections, running:

would yield the given SQL query to the block, but if the object was a MySQLi::BooleanBasedBlind, the same call would yield:

Each of these is sent to the block to be evaluated as a condition, and leak one bit of information, recall that in boolean-based blind SQLi, we only know whether the query returned a result or not, so we can only leak one bit with one query, and this is exactly what the library does.

Time-based blind support for MySQL/MariaDB was done in a similar manner, except that these conditions were wrapped inside if(..., sleep(delay), 1), so that a delay is produced if the condition is true, the library also takes care of checking if the target slept more than sleepdelay or not, and all of this is transparent to the user.

The library had to be refactored multiple times, to support more options, to avoid having repetitive code and make unit-testing possible, also, for printing verbose messages that could be useful to the user, it was necessary to access the module datastore (because printing methods had to access the VERBOSE option which is set by the user), accessing it wasn’t an easy task, because the whole library was a mixin (a module the user should include inside their metasploit module class), the mixin methods could access it, but not the classes that belong to it, a factory pattern was necessary to get this working, basically, a create_sqli method that the user calls, that instanciates one of the classes and injects the datastore through its constructor.

My list of features to add kept growing during this period, and I implemented many of them (support for truncated queries, hex encoding strings, encoders and so on).

Also, during the first month, I re-wrote some SQL injection modules to make them use my library, it reduced a lot of their complexity, and made them more efficient:

SQLite support and specs for the library

SQLite support was the second on my priority list, mostly because I always thought SQLite was different because of its minimalism, different in a way that could make it hard for module writers to implement SQL injection attacks when it is in-use, the part that was a bit more complex was time-based blind SQL injection, because SQLite does not have a function like sleep, that causes a delay in the response, I had to use heavy queries, which are queries that take time to be computed, luckily, there exists a function called randomblob, which takes a size parameter, and returns random data of that size, the user specifies a delay in seconds, and I do some benchmarking in the library to find the perfect randomblob parameter that would cause that delay, once found, 1000000 for example, my SQL injection would work like this:

The library would yield conditions like this to the block, to be evaluated, and would measure timings, and return the data.

If a bit is 1, it should get to the second part of the and, which should take some time to run, this is how the library knows the outcome of the condition.

I also had to refactor code when adding support for SQLite, because I noticed there was a lot of code shared between DBMS-specific implementations, on blind queries mostly, so I added a Utils mixin that acts like an interface that is implemented in all the classes that make use of the shared code.

For testing I wrote:

Support for PostgreSQL, and other database-management systems

PostgreSQL support was easy to add, because of how popular the DBMS is, it was easy to find vulnerable software to test it, to get it running in a testing environment and so on, I wrote a module for CVE-2019-13373, which is a vulnerability found on some versions of D-Link Central WiFi Manager CWM(100), and a test module for vulnerable code I wrote myself.

Support for MSSQL and Oracle Database was added in the last month of the program, I provided test modules for each, but no exploit on real vulnerabilities, might implement some in the future.

Working with rapid7 members on the Metasploit Framework was really a great experience for me, I learned a lot of things, would like to thank my mentor, Jeffrey Martin (Op3n4M3), as well as other contributors who helped me out, h00die, zeroSteiner and dwelch-r7 to name a few.

I learned a lot, on advanced git topics, on software testing and programming/software engineering best practices.

I will keep contributing to the project, hopefully getting all of the library merged, and getting some other issues I had noticed in the codebase fixed.